Comfortably Numb and its sequels have been inspired by many things: my own relationship with a parent, the song of the same name by Pink Floyd, Charlaine Harris’s characters from the Sookie Stackhouse novels, the characterizations from True Blood, and the city of New York itself.

However, one of the main inspirations has been the Metropolitan Museum of Art and the collections housed inside of it.

I’ve not been to the MET as much as I wish I could, but if I lived in New York, I would love to take on Sookie’s goal: to see a new gallery of the enormous museum each week, to study its pieces, to give herself the time to allow the art to move her.

The placement of the Northman Galleries in the story

Note:  Most of the “Northman Galleries” are actually part of The Annenberg Galleries.

I chose this group of galleries because the nine (818-826) are already “a unit.”  I also needed a bigger room to house the NP parties, so I added Gallery 800 for practicality.  Also, the time frame and type of paintings make it more feasible that many of them could have been donated by a single collector who had been visionary enough to understand what the Impressionists were doing and how they were changing art (for better or worse).  In this story, that single collector was Appius Northman’s grandfather (Eric’s great-grandfather). 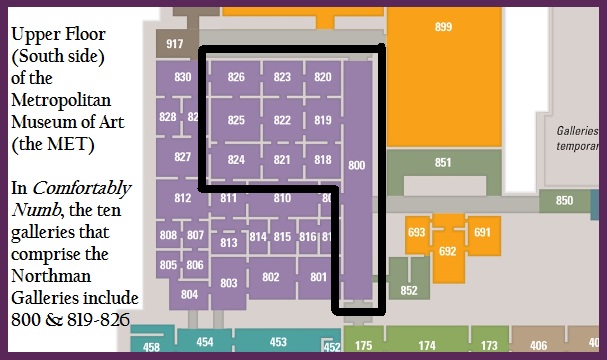 While I “appreciate” Monet, I have never been a huge fan of his.  This gallery, one of the Monet galleries in the MET, plays such a huge role in the story.  It was chosen out of practicality b/c of its proximity and entrance into Gallery 800, which was needed for the set-up of the parties.  From there, I researched to see what paintings were in the gallery, and I was happy to find The Four Trees, which I have always liked.  After that, I let that painting help to tell the story, and I found a richness in it that I had never seen before.  Thank you, Mr. Monet.  However, though I tried, I still can’t love  Haystacks.  😉

One of my favorite artists is Vincent Van Gogh–though I never really appreciated him properly until I saw his work.  The paint rises from the canvas in a way that is so rich and beautiful that it almost hurts.  The first Van Gogh I ever saw was in the MET.  And the first one that I truly fell in love with was Wheat Field with Cypresses.  See the bench in the picture?  Yeah–I spent quite a while there one day.  The picture of the painting doesn’t do it justice, but I hope that my description gave you more insight into its beauty. 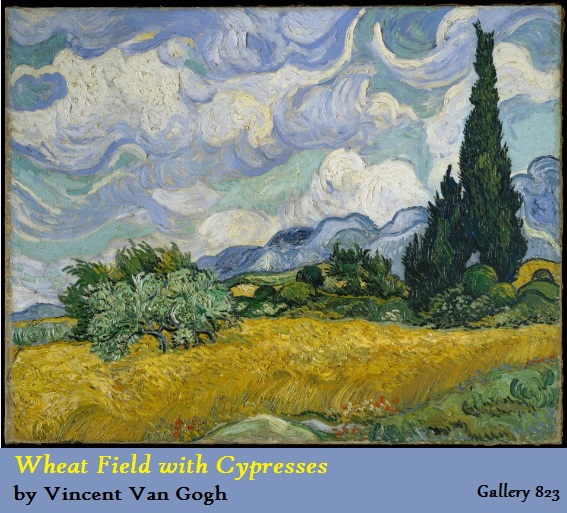 After the “Northman Galleries,” I generally chose the galleries that Sookie would visit at random.  I went to the museum map, closed my eyes, ran circles around the map with my mouse, and then clicked.  However, this one was a “cheat” of sorts.  I needed something to be the catalyst for the Electra story, and the cameo was perfect.  Notice the action of the women in the cameo–the tension–compared to the men in the cameo.  VERY powerful.  Again, after I found the piece, I let it talk to me, and it had a lot to say. 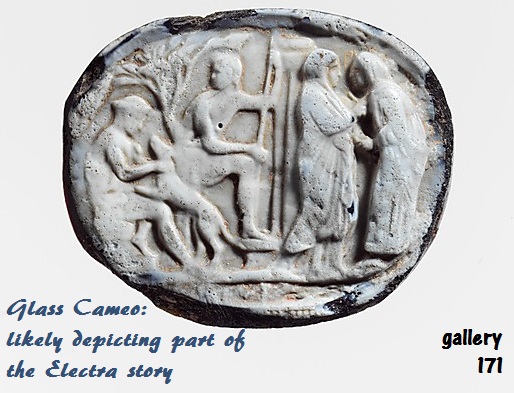 I chose Gallery 111 kind of how Sookie did–at random.  I basically ran my mouse around the map–while my eyes were closed–and when I stopped, it was on Gallery 111.

So–you might ask–how do I pick Sookie’s “special piece” for the day.  Well–the MET website is wonderful.  What I do is go to the gallery and look at all the pieces inside of it.  And then–though it sounds cheesy–I let the piece “pick me.”  After that happens, I do a little research on it.  And–in the case of the Magic Wand–I did a bit of research on the type of object too.  Then, I basically let the chapter develop around the piece.  In this case, the purpose of the Magic Wand–as a protective device–really struck me.  The Egyptians used such an object to draw a circle around the one that needed to be protected.

Can you imagine it?  Parents drawing protective circles around their children?  The weak having circles drawn around them?  The more I thought about it, the more the idea moved me.  And I could see how this piece would be meaningful to both Sookie and Eric.

Of course, they would both pick it as their favorite!  Sookie has felt this odd connection for over a year, but Eric is new to it.  However, he’s opening himself up as much as he can by letting the art connect them.  In this case, that connection is–indeed–magic.  And it is also protective. 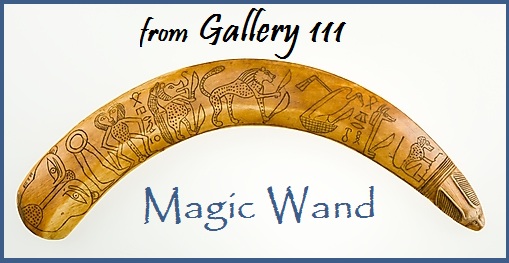 I chose Gallery 758 at random.  I will admit that that art in this particular gallery is not my favorite genre, but as I studied it, I began to see the stories in the pieces.  And the story in Conversation Piece began to weave itself into my head.  Then I let it weave itself into the chapter.  I like how the painting is understated–just a moment of life captured on canvas.  But it is just the kind of life that Eric and Sookie both missed.

This is one of the galleries where Eric and Sookie don’t choose the same piece.  Again, I picked the gallery at random, but when I saw what I’d chosen, I did a little dance of joy.  Like Eric (in this fic), I’m not a huge fan of modern art.  When things get too abstract, I admit that I lose a little interest (no offense to modern art fans).  This particular gallery seemed perfect for the “random” pick idea that I wanted to use.  Only one artist’s works are inside, Clyfford Still, and the paintings really are all marked with just a year or as “untitled.”  Clyfford Still is actually a very important artist (one of the leaders of “Abstract Expressionism”).  Unfortunately, this genre isn’t my cup of tea, though I definitely appreciate Still’s use of color juxtapositions, and the size of some of his canvases create a sense of drama.

This is a fascinating gallery.  Again, I picked it at random.  I admit to having very little experience with art from Oceania.  And I didn’t know much at all about Melanesian art before perusing the pieces of this gallery.  But once I got started, I picked Eric’s piece pretty easily.  The House Post seemed like something that would appeal to the character for many reasons (not all of them revealed before this piece is discussed).  For Sookie’s choice, I went with something “fun” to help to demonstrate the new side of her personality emerging.  The story about the yam exchange among men is true.  Click that picture to find out more.  It’s quite amusing actually.

This is one of those galleries that I “cheated” on when picking.  I needed for the gallery to contain something from the Viking era, and there aren’t many Viking pieces in the MET, but I did a little research and found this little “gem” of a gallery (inside joke: it contains lots of jewelry).  I have always loved brooches, and when I saw the fragment–the gorgeous piece that Sookie and Eric choose–it literally screamed to me.  The idea of a beautiful, though broken piece was just perfect! 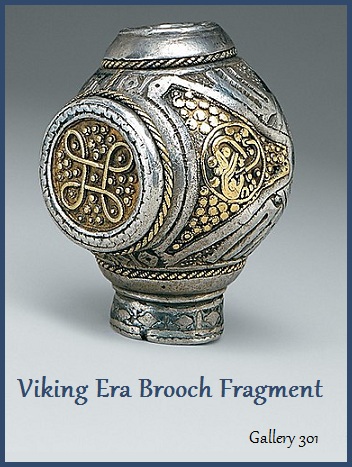 This gallery was another one that I picked randomly.  Like Eric, I didn’t know much about Islamic art before “visiting” this gallery at the MET website.  But the work in it definitely “appealed” to both Eric and me, which is one of the reasons why the chapter spent exploring Gallery 455 is told from Eric’s POV.  It did end up being the perfect place to describe the things that Eric might have wanted v. what Appius demanded he do with his life.  And the Mihrab–in addition to being beautiful–was what Eric was drawn to the most in the gallery.  Sookie, meanwhile is drawn to the manuscripts.  Eric rightly guesses that Sookie will choose one of the manuscripts as her favorite, but he doesn’t pick the exact one.  Meanwhile, Sookie is upset by the Mihrab for some reason, though Eric’s not quite sure why. 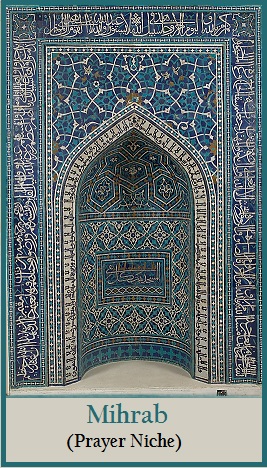 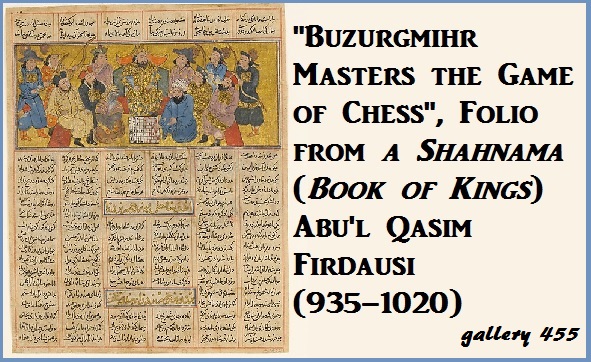 Again, this gallery was chosen at random, and at first I had no idea what to do with it!  But then as I was exploring the various instruments, I began to wonder how a deaf person would think about them.  Then I wondered about what Sookie would have thought of musical instruments as a kid.  After that, the ideas for Chapter 50 just flowed from me.  I chose the harpsichord for Sookie’s picture because of the obvious reason: it is similar to Eric’s piano.  It is also gorgeous.  I remember seeing it the last time I was at the MET.  The painting on the underside of the lid is so vibrant! 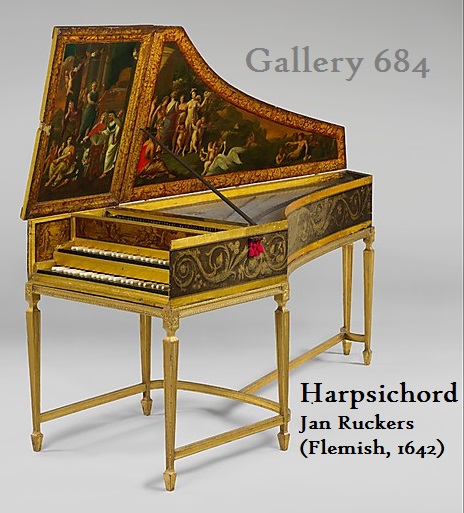 I sort of “cheated” when I chose this gallery.  Knowing that Eric and Sookie would be getting their kitten by the end of chapter 3 of Touch the Flame, I wanted for the piece of art to relate to a cat, so I chose just from the Egyptian galleries (but I chose at random among them).  I figured that all of them would have something with cats (LOL).  Anyway, I ended up with Gallery 135.  From there, I chose the particular piece I did because of the myth behind it.  It definitely fit in with the story.  Plus, the badass-ness of the cat was cool. 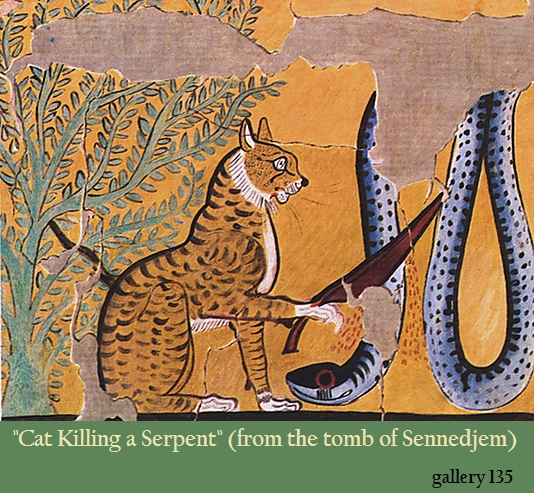 After I chose the gallery, then I looked inside of it and found Pandora.  From there, the story just took off and Appius took over for a while.  Scary.

The Chariot of Apollo was in the gallery too, but it’s not now.  However, I’m gonna take some artistic license and keep this painting in there b/c the story really resonated with what was going on in chapters 22 and 23 of TtF. 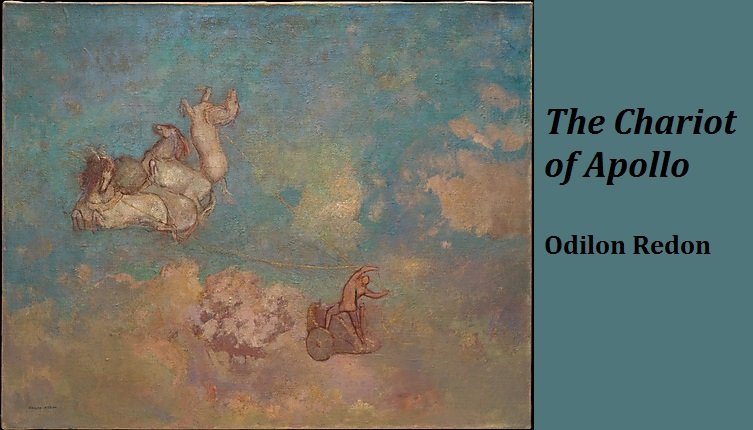 I “cheated” when I picked this gallery in that I was “looking” for a piece depicting the Eprimetheus story.  At the same time, I loved this particular gallery when I visited the MET.  I love drawings, especially by famous artists.  Sometimes the drawings depict them “drafting” before they paint.  I always loved knowing that they weren’t infallible.  And I also like the art found in manuscripts, like the “Four Heads” studies by Hollar. 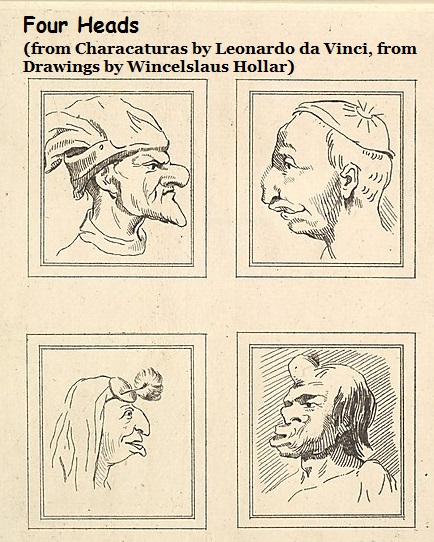 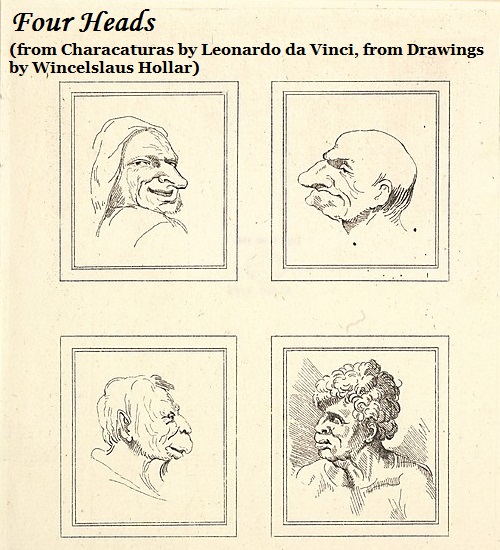 This gallery is mentioned in Chapter 37 of Burn out the Pain.  I picked it at random.  I will admit that print art isn’t my favorite, but there is something about Japanese art that appeals to me.  I think it’s the concise lines and the subtlety of story.  The more I looked at the pieces in the gallery, the more I liked them.  I ended up picking a print depicting butterflies and moths.

I liked the idea of comparing Eric to a moth and Sookie to a butterfly.  I thought it was fitting in a lot of ways.  Since I’ve written this chapter, however, this particular print has been taken down.  The MET has a huge collection and curators will rotate the work to showcase various things.  I was sorry to find out that this is not longer up; however, the gallery has some beautiful new things on display.  It’s funny how different this section might have been if I’d written it earlier or later.  🙂

Well–that’s it!  I hope you’ve enjoyed having a little glimpse into some of the galleries of the MET.

4 thoughts on “The MET & the Art of the CN Trilogy” 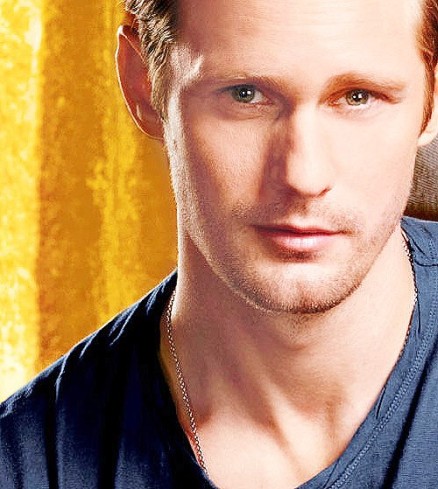 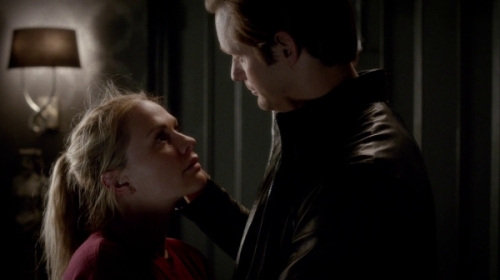 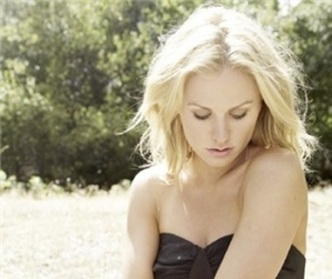 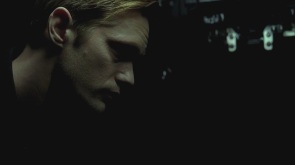