Story Summary: (Part 3 of the UN-iverse—following Uninvited and Uncharted) After finally uniting personally by accepting the Fae bond and finishing the vampire bond, Sookie and Eric now concentrate upon uniting their friends to war against Russell and his allies. Two powerful forces will collide in Rhodes, but could the Fellowship bring them both down? [Note: this won’t make much sense if the others in the series aren’t read first.]

Disclaimer: I own no characters or plotlines related to True Blood or the Southern Vampire Mysteries. I write for my own pleasure (and yours) only and make no profit from my work.

“There is no chance, no destiny, no fate, that can circumvent or hinder or control the firm resolve of a determined soul.”—Ella Wheeler Wilcox

Roman gestured for his assistant, Mirabel, to leave the room right before his phone rang.

He glanced at the caller ID and answered immediately.

“Yes?” he said in greeting.

“The usual place,” a masculine voice whispered. “And be sure you are not followed. One of your immediate circle cannot be trusted.”

“I know,” Roman responded with a roll of his eyes before he hung up. In truth, he’d known that Mirabel was a spy for almost six years. However, he’d kept her on nonetheless, allowing her access to only enough information to make sure her “boss” didn’t become suspicious.

It hadn’t taken Roman long at all to learn who that boss was: Nan Flanagan.

He’d not been surprised. Though he didn’t know why Nan was so interested in his personal business, he’d never completely trusted her. After all, Roman had not lived as long as he had being careless with his life—or too trusting of anyone who didn’t share his blood.

With that in mind, he quickly used the office phone to dial Mirabel.

“May I ask where you will be? Just in case someone calls for you?” his assistant asked.

“I have a hankering for B-positive,” Roman answered simply before hanging up. Quickly, the Guardian of the Authority used his thumbprint to open an access panel. Then, he entered a twenty-digit code that opened the secret door that led to the secret tunnel that led to his secret exit from the building—an exit that was over a mile from the building.

Call him paranoid—but Roman had told no one except for his child, Jacob, and his trusted confidant, Duncan, of the passage; most vampires in the Authority assumed that he exited the building via one of the other “quasi-secret” passages. Roman let them assume.

Though he couldn’t fly, Roman had always been incredibly fast, and he had the ability to cover his own scent, an extremely rare gift among vampires. Still, he double-checked to make sure he’d not been followed after he reached the meeting place.

“Child,” a voice behind him said.

Roman turned to his maker and bowed before her. She looked like an old woman, but she’d always been able to sneak up on him, for she, too, had the ability to conceal her scent—though she rarely bothered.

“You are the sneakiest bitch on this earth; I am certain of it,” he stated flatly.

She chuckled and approached him slowly. She was using a cane to support herself, but they both knew that it could become a weapon if need be—a deadly one. “Do not sell me short, child. I am certain that I have more stealth than many in other realms too.”

He nodded in agreement and once more looked around to ensure their privacy—and her safety.

“No one followed you,” she said with certainty. “Rise, child.”

He nodded again and stood. His maker couldn’t call up visions, so she never saw everything about the future; however, when she spoke with surety, she was not to be doubted.

“Why have you called me?” he asked. “I thought we’d not meet again until Rhodes.”

“You need to make Duncan your Magister,” she said without preamble.

“That would put a target on his back that I’d rather not see there,” Roman said cautiously of his closest friend. Plus, he’d always preferred having Duncan as his more-less personal enforcer. And Duncan had never wanted an “official” role in the Authority; otherwise, Roman would have made him a Councilor years before.

“He needs to have one on his back,” the Ancient Pythoness said. “And he needs to get that target tonight!”

“Will he survive having it?” Roman asked with concern.

“The Welshman’s chances are even better than yours when it comes to surviving,” Pythia said forebodingly, though there was a smirk on her lips.

In fact, there was rarely a moment when she wasn’t smirking. She claimed that it was how she’d survived so long.

Roman chuckled. He’d heard similar “threats” before related to the Russell Edgington situation. What he could get out of his maker’s often enigmatic statements was that a war with Russell Edgington was inevitable, yet Roman was not to be the general of this conflict.

That role would belong to Eric Northman. Roman could admit that he envied the Viking when it came to this role; however, his maker had made it very clear that Roman’s only chance of survival was in giving up leadership when it came to the fight with Russell. And Roman wanted to keep his un-dead life more than he wanted glory in battle.

Moreover, the fact that Eric Northman was Duncan’s vampire brother hadn’t hurt matters. That fact made Roman predisposed to like the Norseman.

“I will appoint Duncan the new Magister then,” Roman told his maker.

Pythia approached her child and stroked his cheek tenderly.

“This could be our last moment together,” she said matter-of-factly.

If Roman would have had breath, it would have been stolen from him. “No!” he denied.

Shorter than him, Pythia smiled up at her child. And, though her glassy gaze didn’t seem to connect with anything, Roman knew that she was looking intently at him.

“Truth is truth, my son. Destiny is destiny. I am shown several versions of the future because the Fates are cunts,” she cackled. “And they like to toy with me. In many of those futures, this is that last time I see you, and I wish to tell you how much I have,” she paused, “loved you.”

“There is no such thing as ‘sure’ when it comes to the future; that word applies only to the past and to the now,” she interrupted.

“I won’t say goodbye to you,” he said stubbornly, once more sinking down to one knee before his maker.

“I would not ask you to,” she returned as she gently patted his head. “I would say only that you have never disappointed me. Nor will you ever.”

And, with that, she was gone.

“Stealthy bitch,” Roman chuckled ruefully, even as he stayed on his knees.

He closed his eyes, saying a prayer to Jupiter and Zeus. He hoped that between his gods and Pythia’s gods, he would have the chance to be with his maker again.

After a few more minutes and a few more prayers, the Guardian rose to his feet and took out his phone. He called Mirabel and instructed her to begin the paperwork that would install Duncan as Magister—knowing that he was making his friend’s target ever bigger with every word he spoke to the spy.

“I’ve killed one Magister. I can kill another, and that prick, Duncan, has needed to die for centuries!” Russell seethed.

“There’s more,” Nan said, a wicked smile in her voice.

“What?” Russell asked, sensing that his child was about to tell him something good.

“Mirabel monitored Roman’s call to Duncan. You will never believe one of their topics of conversation.”

“Roman wanted to make sure that Duncan would be prepared to do what was necessary once Eric Northman is caught.”

“Why would he be concerned that Duncan wouldn’t?” Russell asked.

“Duncan was the second child of,” Nan paused dramatically, “Godric.”

“And what did he tell Roman?”

“That he would be prepared to execute Eric for the death of his predecessor. That his loyalty has belonged to Roman for centuries.”

“Yes,” Russell said sourly, “it has. Duncan is a glorified pit bull.”

“Roman obviously feels threatened,” Russell mused. “He must sense that something is in the air.”

“Maybe,” Nan returned. “And Duncan’s loyalty—despite his familial relationship to Northman—cannot be questioned.”

“That relationship is yet another reason to kill the Welshman,” Russell growled.

“Then I have good news. Roman’s call to Duncan was traced to Atlanta,” Nan reported.

“I have allies in Georgia,” Russell said sinisterly.

“And—given the fact that we’ve been unable to lock down Duncan’s location for over a decade—this might be the perfect time to take him out,” the vampiress stated. “Plus, in his role as Magister, he’ll be more visible. And I will know of all his trial dates.”

“Yes,” Russell responded, smiling at the thought of getting rid of Roman’s enforcer. “Make him go away. Before Rhodes if possible.”

“I will,” his child said before hanging up.

“Is all well, my love?” Talbot asked venturing into his lover’s office. Since the whole debacle had occurred in Arizona, Russell had been in a foul mood—which had been made even more foul by the fact that the fairy, who had apparently been helping Eric Northman, had left the vehicle that Victor had been tracking in the parking garage of one of Felipe’s hotels.

Needless to say, Russell had destroyed more than one of their prized possessions since he’d woken up and gotten the report.

“Yes,” Russell responded, calmer now. He patted his lap for his lover to sit on.

With a coquettish smile, Talbot did as his master requested.

“Do you wish to talk about it?” Talbot asked.

“Good,” Talbot grinned, “talking bores me, and William has procured us two young men to enjoy this evening. Both are virgins—in male sex and in blood-giving.”

Russell smiled. “William was a good find, I think.”

“And so very fun to manipulate. You should have seen his flash of guilt when I asked him to get us a pure meal,” Talbot laughed.

“Ah, yes,” Russell chuckled in return. “William’s guilt is only equaled by his cruelty once he’s wound up. He is like a never-ending cycle of amusement. And I do so enjoy watching you fuck him. It’s been so long since I’ve seen you take a man.”

“Well then,” Talbot cooed even as he licked Russell’s fang, “let’s go be amused.”

Many thanks to the wonderful Kleannhouse, who has lent me her eyes so that I can present you “cleaner” work. And to, Sephrenia, who responsible for the art for this piece—you continue to be an inspiration to me! Ladies, you give me your time and ask for nothing in return. You will always have my gratitude and friendship.

I hope that you enjoy the story!  Please comment if you find the time and inclination. 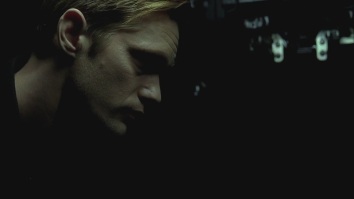